Soft coatings are multilayer thin film structures composed of thin layers of ZnS and Cryolyte. They may also contain very thin silver layers. A typical soft coating is a simple band-pass structure on one substrate surface and a blocker on another as shown in Figure 1 below. The blocker may use thin layers of silver and/or they may contain an auxiliary blocking color glass or an organically died epoxy. All components are laminated together in a vertical stack in an attempt to provide some degree of environmental protection.

Individual parts are diced or cored from a larger wafer. As the coatings are fragile and moisture sensitive, the edges of the coated substrate may be scribed away with the goal of lengthening the amount of time before noticeable and unsightly environmental degradation occurs. All soft filters fail over time, where the lifetime is a function of the environment and the care in construction of the filter. One to five years is a typical expected lifetime in normal office type environments.

The low cost of soft coatings is derived from a combination of the low capital cost of the deposition equipment, rapid cycle times and simple and inexpensive float glass substrates. As the load sizes are relatively low, and they contain significant handling costs due to the sealing and ring assemblies, the cost vs. volume curve asymptotically flattens after only a few dozen 1 inch parts, or a handful of 2 inch or larger parts.

Figure 1. A typical soft coating has three structures laminated together to help provide moisture resistance. The structure is typically 2-5mm in thickness and mounted in a ring to further try to restrict humidity ingress.

Soft coatings have large optical losses from both scatter and absorption in the visible and near infra-red, which further increases in the UV and blue. Figure 2 shows the spectral function of a series of typical commercially available dielectric (no silver) laminated soft coatings across the visible band. Soft coatings typically also have severe ripple in the pass-band which not only lowers average transmission, but also adds a degree of uncertainty to the instruments spectral function. The ripple and uncertainty of the spectral functions of soft coatings are a result of the manual and labor intensive nature of the deposition, which provides a much greater degree of variation to performance as compared to computer controlled hard coatings. 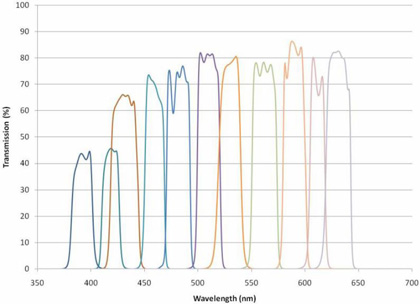 Figure 2. Soft coating designed for high transmission that contains no silver layers. The transmission can rise above 80% in the green/red, but drops to less than 50% in the UV blue. Also note the severe ripple in the pass-band attributable to the lack of computer controlled deposition control.

Hard dielectric films produced by Alluxa’s advanced high speed plasma deposition process are nearly lossless, with extinction coefficients in the low ppm range from the UV to the IR. They are made using sophisticated computer control algorithms that control thickness of each layer to an atomic monolayer or less, and consequentially they have much higher transmission and dramatically flatter pass-bands. Figure 3 shows comparable fully blocked filters built using Alluxa’s hard coatings that are designed as drop in replacements of the soft coating filters shown in Figure 2. 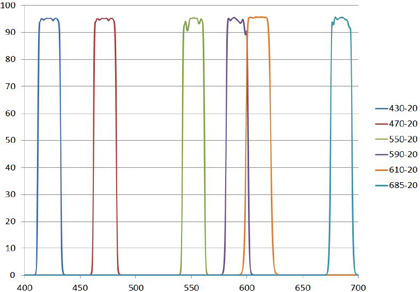 Figure 3. Hard coatings by Alluxa on a single side of a glass substrate. Note that with an AR on the back the transmission would approach 100%. Also note the inherent improved “squareness” of spectral shape, which helps S/N by increasing transmission as well as blocking. Improved shape is direct result of the repeatability of automation.

Depending on substrate selection, Alluxa hard coatings have a temperature stability of less than 5 part per million (ppm) of wavelength. Soft coatings have a typical value of 50 ppm, which means for the instrument design the filter must be controlled to +/- 15C for a 1nm filter tolerance. For telecom applications, Alluxa routinely builds filters to less than 1 picometer per degree Celsius at 1550m, well less than 1 part per million change in wavelength.

Alluxa can provide filters with TWE values of less than ¼ wave peak to valley as shown in Figure 4 if the user requires. For most designs, the TWE of the finished filter is essentially identical to that of the uncoated substrate. Soft coatings with their laminated structure would have to undergo a complicated post lamination grinding and polishing step to approach a single wave per inch of TWE.

Because of the excellent stability of Alluxa hard coatings , extraordinarily narrow films can be built and used in instruments without temperature control. Figure 5 shows a multi-cavity filter of less than 0.4nm at 1550nm. Figure 6 shows a typical laser filter in the visible. 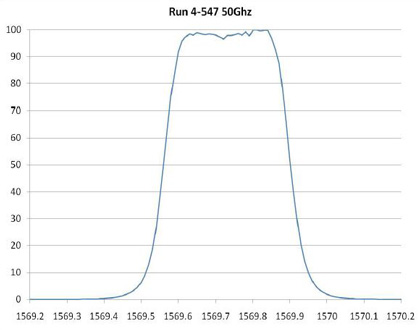 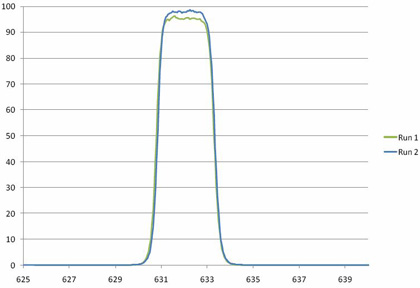 For OEM applications, Alluxa’s hard coatings have much larger load sizes than typical soft coatings. As volumes approach 20-30 one inch parts, Alluxa is capable of matching or beating the cost structure of soft coatings, while providing the reliability and performance advantages of hard coating technology.

Alluxa designs and manufactures next generation hard coated optical filters using a proprietary plasma deposition process in Santa Rosa, CA. Alluxa’s unique, purpose-built deposition platform and control systems were designed, developed, and built by our team in Santa Rosa, CA to address the demanding requirements of the next generation of systems and instruments. This unique technology allows Alluxa to create the world’s most challenging filters at breakthrough price points.